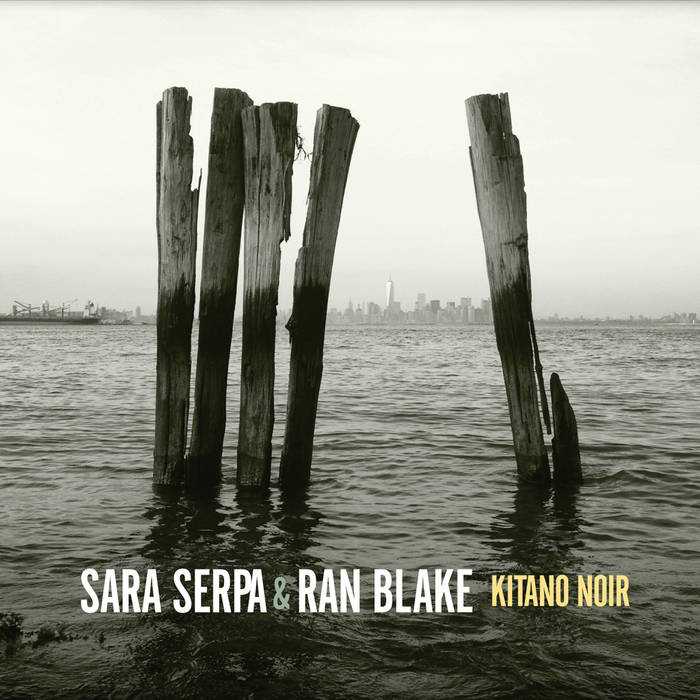 There is much to gain in collaborations between musicians from different generations. The younger receives an education, lessons in history, technique and taste that only experience can provide, while the older can utilize the youthful energy and drive, challenging themselves further.

The legendary pianist Ran Blake has long been known as a unique and eloquent stylist, his style ranging from the evocative to romantic to avant-garde. He is also known as a tremendous and supportive accompanist to vocalists. Sara Serpa is a vocalist of a much younger generation, who approaches the songs of the American songbook, music from her native Portugal, and her own original material with equal expertise.

The duo has worked together since Serpa studied with Blake at the New England Conservatory. Together, they showcase their unique musical bond on Kitano Noir, a live recording from New York City’s Kitano Jazz venue and their third release as a duo, the others recorded live in Boston and in Lisbon, Portugal. Here their advancement as a pair can be heard as they focus on well-rehearsed originals written by Blake, and intriguing standards.

Blake has fashioned an extraordinary musical career beginning in the 1950s with early associations with vocalists, including the fantastic Chris Connor, who the pianist has regularly honored by playing pieces she made famous. Though he has played in combos, Blake has reserved some of his best playing for solo and duet performances, most notably with the incredible vocalist Jeanne Lee. He has also continued his work with contemporary vocalists, like Christine Correa and Dominique Eade. An important aspect of Blake’s influence has been his tenure as a professor at the New England Conservatory, where he has passed on his knowledge of music and classic film to receptive pupils for years and years.

One such disciple was Portuguese vocalist and composer Sara Serpa, who gained much from her affiliation with Blake. Her interests in the avant-garde and in traditional jazz forms have inspired her own fascinating and eclectic work and mind broadening collaborations, including recent work with John Zorn and Danilo Perez.

Since their initial meeting, Blake and Serpa have focused on developing a rapport, learning each other’s performance habits and tastes, mainly by rehearsing standards and discussing their interests. Naturally, some focus was placed on Blake’s fascination with classic movies, especially film noir. His interest has developed an esthetic that can be heard in his playing and in the material he chooses, which has focused on standards and show tunes made classics by vocalists in the 1940s and 1950s.

Taken from live recordings from Jazz at the Kitano made during two residencies in 2013 and 2014, their new recording Kitano Noir displays the duo’s development since their first recording in 2010. They present a wide-ranging program of pieces, from original Blake compositions to standards to more eclectic song forms from Europe.

The recording begins with Blake’s subtle “Field Cry” featuring a calm wordless vocal which is followed by Segal and Fisher’s “When Sunny Gets Blue,” a holdover from Jeanne Lee but equally sublime here. A solo piano rendition of Blake’s “Curtis,” a tribute to the wonderful soul singer and composer Curtis Mayfield, which transforms into Kay Swift’s “Fine and Dandy,” a regular in the duo’s rotation and a showcase for both. Serpa’s wordless vocals on Blake’s “Cry Wolf” are stirring and her solo rendition of Brazilians Piratini and Caco Velho’s “Mãe Preta” politically charged and racially conscious fado is truly a revelation.

Blake’s “Indian Winter” displays the duo’s playfulness as they bounce ideas off each other, while the classic “Mood Indigo” is handled with a moody introspection. Margo Guryan’s dramatic “Moonride” is a heartwarming departure and a throwback to Chris Connor’s genius. “Round Midnight” is a welcome favorite for Blake, as he has recorded it many times, and his impish accompaniment pushes Serpa into fascinating twists and turns. Blake’s intriguing solo performance of Pietro Gori’s anarchist tune “Addio Lugano” leads to Cole Porter’s “Get Out of Town,” a go to standard for the duo that contains pathos aplenty.

Another Blake go to and Conner chestnut, Goodman and Udell’s “Driftwood,” floats by as in a haze. “Short Life of Barbara Monk” is Blake’s dedication to Thelonious Monk’s unfortunate daughter and is performed touchingly with wordless vocals. Revisiting a composition that he recorded near the beginning of his career (Plays Solo Piano, ESP 1965), Blake plays Higginbotham, Drake and Fisher’s “Good Morning Heartache” as expertly as he did fifty years ago, recalling the genius of Billie Holiday’s initial recording in 1946. The program ends with Arthur Hamilton’s “Sing a Rainbow,” a piece made famous by a Peggy Lee performance in the 1955 film Pete Kelly’s Blues, and made poignant by the duo’s delicacy.

Ran Blake and Sara Serpa have developed a partnership of incredible empathy which can only be developed through trust and regular meetings. Kitano Noir provides a wonderful view of their talents as a duo and individually, one never outshining the other.